I'll freely admit to having way too much nail polish, well not to anyone but myself but it's probably true. Out of the 100+ I have only two are indie polishes. While I've seen and coveted many an indie I don't ever buy them because I can't really afford $10 plus dollars for a polish & because I'm afraid that they won't live up to their pictures. The first indie polish I bought meets the second issue perfectly. I loved, worshiped and adored the photos of it so when it went on sale I broke my indie polish virginity and bought. After waiting impatiently for it to arrive I was left with a feeling of Meh. It's not horrible by any means and definitely more original than anything I've seen in stores but it's not the awesome it seemed in the picture. And no I will not list the brand of it. 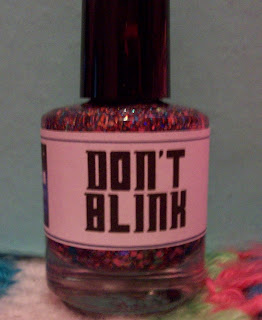 As for the second indie polish, well I may have clutched it my chest and squee'd in delight when I saw it in person. To be totally honest I can't even remember how I came across Lyn B Designs, probably one of the bajillion nail blogs I follow, but when she announced a $5 sale on Facebook I checked it out. When I saw that she had Fandom inspired polishes my interest was definitely piqued. She makes so many pretty polishes that I was having trouble deciding until I came across "Don't Blink". Ordering during the holidays made waiting for it's delivery close to torture.  When the little package finally came I ripped that sucker open, well I tried to but it was so well packaged that I had to get the scissors out. I made my sister (who's not into polish) watch the unveiling and when that little bottle of awesome fell into my hand, well apparently my expression was pretty entertaining. What can I say? I get excited about things. I immediately opened it and put it over the polish I was already wearing. A jelly sandwich of some pink flakie from Hot Topic and Finger Paints "Santa's Magic." It was glorious sparkly glitter bomb. 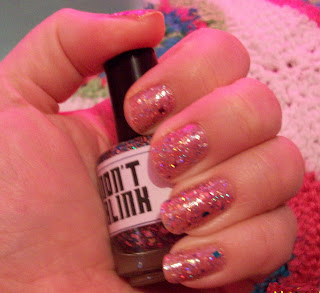 First thing I have to say is that the picture on Etsy don't do it justice. Don't Blink is filled with larger purple & teals squares, small pink squares, iridescent hexes and loads of teeny glitter. It's the prettiest polish I have ever seen but damn is it hard to photograph. I swear some of the teeny glitter is holographic. I'm wearing one coat of "Don't Blink" over two coats of Sinful Colors "Slate" and two coats of top coat. The coverage is very nice and it's pretty smooth for having larger glitter in it. It didn't require much fishing for the square glitter but that's not uncommon for any polish with glitter on the bigger side. 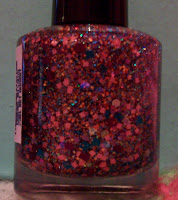 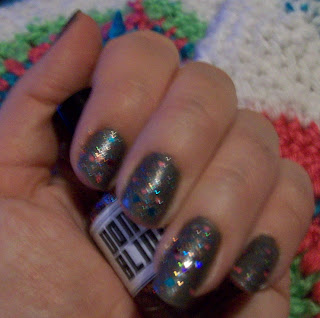 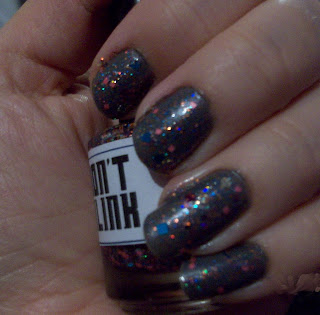 First off, I apologize for the worn tips on my nails. I've had this combo on for a couple days now & wasn't planning on posting any pictures of it until it made my Boss stop talking in mid-sentence. I mean I love this combo, it's color shifting, flakey goodness has distracting me on many a drive home & during boring conversations/family events. Sorry I don't care about sports. Anywho, it's one coat of Color Mates 'Decadence' (a metallic brown) + one coat of Hard Candy 'Beetle' + one coat of Essie 'Shine of the Times'. I did use a base coat & clear top coat as well. Beetle is gorgeous without Shine on top of it but adding it just amplifies all the goodness by twenty. 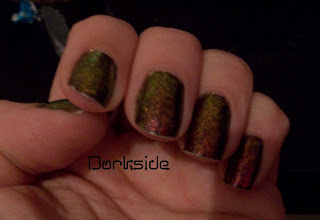 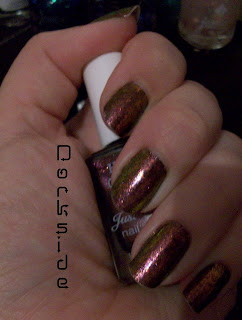